Courtesy of the City of Thunder Bay Archives. 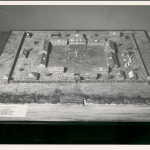 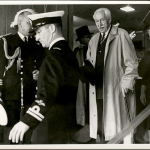 Fort William, the operations base of the North West Company from 1803 to 1821, marks a milestone in the history of Canada. Starting in 1971, the fort was faithfully reconstructed as a historical site some 15 km from its original location at the mouth of the Kaministiquia River, on the north shore of Lake Superior. Fort William is a significant location in many respects. During the 18th and 19th centuries, it played a crucial role in the fur trade west of the Great Lakes, a major industry at that time, by serving as a meeting place linking the eastern and western parts of the continent. Today, it is still a meeting place, but now it connects the tens of thousands of visitors who flock to the site every year with the experience of the First Nations, French-Canadian, and Scottish people who were the key players in the story of this important turning point in Canadian history.

The same fort, but in two different locations

Today’s Fort William, resembling the original one constructed in 1803, is in a different location than where it first stood. The reasons for the fort’s existence stretch back to the beginning of the 18th century. At that time, in the search for furs that have become increasingly rare in the eastern part of the continent, the French venture progressively further west and north. As early as 1717, Zacharie de la Noue establishes Fort “Camanitigoyaˮ on the Kaministiquia River, close to where the present-day City of Thunder Bay is located *, with the goal of extending the fur trade towards the west. He also seeks to encourage the First Nations people to trade with the French instead of taking their furs to the Hudson’s Bay trading posts established on the shores of James Bay and Hudson’s Bay since 1670. However, the many portages impede travel on the water highway that links Fort “Camanitigoyaˮ to Lake Winnipeg and the river basin for the entire Canadian Northwest. The First Nations people show the French another route, following the Pigeon River, located to the south. This route, which has the advantage of being shorter, has only one long  “grand portageˮ that stretches over 14.5 km. Thus, beginning in 1731, the Kaministiquia River fort is gradually abandoned in favour of the Grand Portage route, which becomes the preferred commercial route for several decades. With the beginning of the British regime, new fur companies are established, notably the North West Company (NWC) in 1779.

Exploration and expansion of the commercial territory

In 1778, Peter Pond, with the support of the NWC, reaches Lake Athabasca, where he discovers a territory still rich in beaver pelts. He becomes the first European to venture so far into the northwestern part of the continent (the area corresponding to the present-day northern border of the Province of Alberta). However, since this area is 5,000 km from Montreal, it is impossible to make this journey by canoe in a single summer. The obvious solution is to set up a warehouse at the halfway point where furs gathered in the North can be loaded into canoes arriving with trade goods shipped from Montreal. Grand Portage is chosen to be this transfer point. After the exchange, the canoes from the Northwest return loaded with trade goods, while those that make the return trip to Montreal carry the pelts.

In 1794, as a result of the American War of Independence, the Jay Treaty establishes a new border between the United States and the British territory. As a result, Grand Portage finds itself on American soil. In order to avoid paying duty on its merchandise, the NWC “rediscoversˮ the Kaministiquia route and, in 1803, relocates its trade operations near the site of the old French fort.

The fort revives the name Kaministiquia and, over time, comes to include some forty buildings erected on 25 acres (10 hectares). More than just a simple trading post, the fort contains storehouses, a great hall, residences for the bourgeois, that is to say, the managers of the NWC, workshops for various artisans and for repairing canoes and boats, granaries, warehouses, offices, and even a jail. These buildings are all part of the reconstructed historical site. As well as serving as a warehouse and meeting place for the canoes arriving from the Northwest and those coming from Montreal, the fort also welcomed the partners of the NWC who would hold their annual meetings there. During the summer meeting of 1807, the partners vote to rename their headquarters Fort William in honour of William McGillivray, who had replaced his deceased uncle, Simon McTavish, as the leading figure of the NWC. […]

The City of Thunder Bay Archives preserves, promotes, and makes public the City’s corporate history by managing documents through systematic records management controls and standards established by the Canadian Council of Archives.