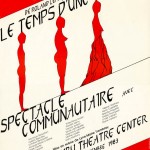 The Théâtre du Nouvel-Ontario (“The Theatre of New-Ontario”, TNO), based in Sudbury, celebrated its 40th anniversary in 2011-2012. Founded in 1971 by young graduates of Laurentian University, the company wanted to reflect the reality of the Franco-Ontarian experience in its shows.

“The creation of the TNO has had a huge impact,” says Yvan Rancourt, one of the first directors of the TNO. “It was a hive where people met, supported each other and shared their enthusiasm for the French language. The success of the TNO has created the Éditions Prise de parole, the event called La Nuit sur l’étang and the Galerie du Nouvel-Ontario. But there have also been negative reactions. We were told at the time that literature and the Franco-Ontarian theatre did not exist and would never exist.”

For Cédric Michaud, who served for 22 years on the TNO Board of Directors, this period seemed like a “big party”.

“We were young and energetic,” he says, “and we had unexpected support, such as the Ste-Anne Parish, that had agreed to house the TNO in its basement.”

The TNO began as a touring company. Shows such as “Et le septième jour” and “Ti-Jean joueur de tour” toured Northern Ontario and elsewhere in the province. But, like any new enterprise, the TNO has had its share of challenges. Its first artistic director, the late André Paiement, left the company in 1975 to devote himself fully to CANO-musique. After several changes in artistic direction, the TNO was in crisis and about to close its doors, a scant ten years after its founding.

It was while participating in one of the editions of the Action Theater Festival in the early 1980s that Yvan Rancourt found the solution to the TNO’s problems.

“I walked in with the conviction that we could find someone to take charge of the destiny of the company,” he adds. “There was an administrative structure to rebuild, but we had equipment, funds, contacts and not a bad reputation, all still intact. This is how I met the writer and actor Jean Marc Dalpé and writer and director Brigitte Haentjens.”

According to Denis St-Jules, an original member of the TNO, it is with the arrival of the Haentjens-Dalpé team that the company has become more professional.

Since that time, the TNO and its artists have won many other national, provincial and regional awards (including a second Governor General’s Award for French Town by Michel Ouellette, in 1994). In addition, the company became the first Franco-Ontarian theatre to acquire its own professional venue in 1997, becoming a distributor of shows from across Canada, as well as a producer of its own work.

And where is the TNO fifteen years later? The artistic and general director of the company, Geneviève Pineault, affirms that the TNO must always surpass itself.

“After 40 years, the TNO has reached a certain maturity,” she says. “Despite the various artistic directions that have been pursued, we have never lost sight of the purpose of the company, to make words, from here and elsewhere, resonate. What I wish for the future is to have the means to dream, to remain an important presence in our community and in the French-Canadian theatre beyond Ontario. We now need facilities worthy of our achievements and aspirations. The TNO and people of Sudbury deserve it.”