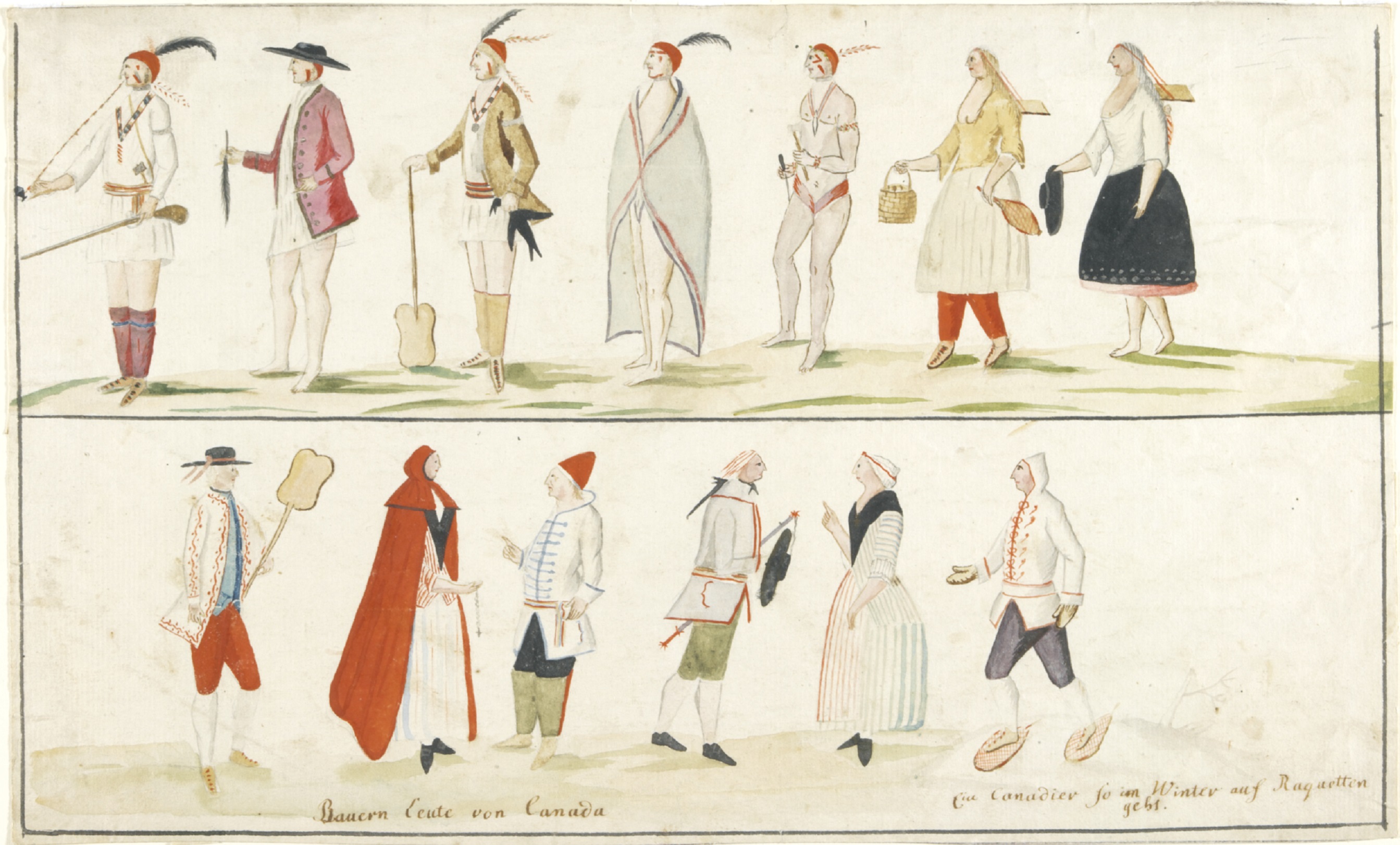 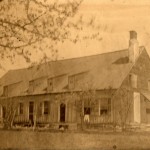 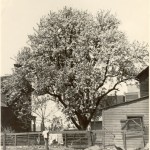 Born on April 21, 1708, in Blandain, Belgium, Pierre Philippe Potier entered the Tournai Jesuit novitiate in 1729.  During his studies, he showed a special gift for languages, a talent that his superiors would see as an indication of his calling to missionary work.  And so, after taking his final vows in 1743, he set off for New France, reaching Quebec City on the 1st of October of that same year.  He spent six months at the Lorette Mission in order to learn some Huron, and then he left Quebec City on June 26, 1744, in order to join Father Armand de la Richardie at the Île aux Bois-Blancs Huron Mission located at the mouth of the Detroit River.  Two years later he became the head of the mission.  In 1747, the institution was destroyed during the revolt lead by Nicolas Orontony’s band of Hurons.  The following year, a decision was made to re-establish the mission closer to Fort Detroit, at Pointe de Montréal located on the south shore of the Detroit River (present-day Windsor, Ontario).  The first farming plots on the south banks of the Detroit River were granted in 1749, at which point French Canadians started settling at Petite Côte, an area adjoining the mission.

Following the British conquest of 1760, Potier extended his ministry to the British settlers, who until that time had gone to the Sainte-Anne de Détroit church on the north shore to worship.  In 1767, the mission officially became Assumption Parish, the first parish in what is now Ontario.  Potier would remain parish priest until his death in 1781.  In spite of the settlement’s isolation, he continued his academic pursuits, devoting much of his time to reading and correspondence.

In addition to parish records and account ledgers, he left five manuscripts concerning the Huron language, along with personal notes, travel itineraries, 22 notebooks containing a variety of writings and – what is of particular concern in this article – a little notebook entitled Façons de Parler Proverbiales, Triviales, Figurées, etc. des Canadiens au XVIIIe Siècle [Proverbial, Everyday and Figurative Expressions, etc. of 18th Century Canadians].  Nicknamed the “Bouche Belgique” [approx. Belgian Philologist ] by his fellow Jesuits, Father Potier noted with interest Canadian vocabulary and idioms, recording in his notebook all the words and expressions that he had never heard before.  He began this practice at the time of his crossing over to the New World and he continued to record words and expressions once in North America, gathering over 2,000 expressions and idioms between 1743 and 1758.  Approximately one third of the words were recorded during his stay in Lorette and the remainder came from the Fort Detroit area.  The importance of this unique document cannot be overestimated.  The linguist André Lapierre has put it this way:  “This notebook is the only evidence we have to date concerning the language spoken by the early settlers who came from France during the 17th and 18th centuries to lay the foundations of the French North American colonial empire that stretched along the shores of the St. Lawrence River.” *

Kept on reserve in the Montreal Municipal Library*, the notebook measures 18.3 cm [7.2 in]   by 11.8 cm [4.6 in] and has 59 pages, most of which are divided into two columns by a vertical line.  The handwriting is tiny and compact, but clearly legible. According to Peter Halford, who published the first integral edition of the glossary, it includes about up to 40 characters per square centimetre*. Potier was a language specialist who entered his data objectively and with great precision.  As opposed to other dictionaries of the period, Potier’s glossary “does not depreciate [belittle] the language used by any given member of society. It records the vocabulary of peasants along with soldiers and of the ruling class; the sayings of ladies of the night are featured as much as those of housewives; and the Latin of a learned fellow Jesuit appears alongside the French of bricklayers and labourers”*. As Halford points out, Potier’s Detroit compilations are particularly interesting, for “the town of Detroit of at that time was a military outpost, a colonization settlement and a way station on the route to the North American interior, and so it attracted soldiers, missionaries, settlers and merchants”*. Thus, the vocabulary Potier heard in the Fort Detroit area and recorded in his notebook is quite rich and varied, having been altered by typically North American cultural influences.

Potier himself often accompanied Canadians and Hurons wintering in the Fort Detroit area, and so he was able to compile some of the specialized vocabulary used in New France. In the following list are some examples of the vocabulary he noted: Bœuf illinois [Illinois ox]: a “bovine of European origins raised in the Illinois Country”; Brasse [pinch] (of tobacco): a “quantity of tobacco”; Coulée [gully]: a ” dead-end valley”; Écaleur de chevreux [kid skinner]: a “hunter”; Faon [fawn]: a “deer skin filled with oil”; Îlet [islet]: a “small wooded island”; Paille-en-cul [straw-tail]: a “wild duck or pintail duck”; Praline: “corn grilled in a pan with fat”; Racros [inlets]: “small coves (in a lake or river)”; Tête de femmes [woman’s head]: “lumps of earth on the prairies.”  Potier also recorded words that were already considered as antiquated or as regionalisms by the era’s lexicographers:  De bisque en coin [from bisque to corner]: “from corner to corner”; Choque [shaker]: “tiller”; Drès [as soon as]: “as soon as, from (written and oral variant of the Fr. dès)”; Ébraillé [popped out]: “unbuttoned”; Fêtard [reveller]: “lazybones”; Firou [butt]: “anus, backside, seat”; Trouver le stèque [find the steak]: “find a way.”  […]

The Significance and the Ramifications of the Glossary

With its vast array of initial attestations, archaisms and regionalisms, backwoods terms and borrowings from the Amerindians, Potier’s glossary constitutes a precious contribution to French North American linguistic heritage.  French speakers of all regions will find the earliest meaningful expressions of their cultural heritage in the glossary, as it contains linguistic evidence of experiences and realities unique to life in North America.  For residents of the Detroit area, the document is also indicative of the important contributions that this former outpost of New France has made to French-language studies.  It should be noted that the first French Canadian dictionary representative of the language spoken in Quebec, the Viger dictionary, would not appear until 1810*.

Although partial editions of Potier’s glossary had long been circulating among linguists*, Peter W. Halford’s 1994 publication of Le Français des Canadiens à la Veille de la Conquête [The French Spoken by Canadians on the Eve of the Conquest] and Robert Toupin’s 1996 publication of Les Écrits de Pierre Potier [The Writings of Pierre Potier]* triggered a wave of interest in “Detroit French”, as well as in the settlement’s unique position as the hub connecting New France with the Pays d’en Haut [the ‘Up’ or ‘Upper’ Country refers to the Amerindian territories surrounding the Great Lakes].  In turn, these publications resulted in a series of articles published in academic journals and the popular press. The French vocabulary of the Detroit region was the specific focus of a weekly series on Windsor’s local Radio-Canada station.  Potier’s glossary was also featured in an exhibit (presented at the Windsor Community Museum, which is located in the François Baby Residence) focusing on the cultural survival of the Detroit region’s French speaking population.  Finally, the glossary, otherwise known as the “Ontario’s French Language Birth Certificate” was given due recognition during the 2001 Detroit/ Windsor Tricentennial celebrations.

Potier’s glossary testifies to the longstanding presence of French speakers in the Detroit region, an enclave that was long-isolated from Canada’s main French-speaking communities. The fact that the community succeeded in surviving 300 years of isolation submerged in a densely populated English-speaking region in the heart of North America continues to draw the attention of various interest groups. The Detroit region is prominently featured in Modéliser le Changement : les Voies du Français, une Étude Internationale [Modelling Change:  An International Study on the Evolutionary Journey of the French Language], a research project overseen by France Martineau of the University of Ottawa that traces the evolution of French from medieval Europe up until the time of New France.  Mots Choisis [A Selection of Words], a 300-year glossary of Detroit French published in 2008, also has Potier’s pioneering work as its starting point. It documents over 3,000 words and expressions that were recorded on both sides of the Detroit River between 1701 and 2001, in order to demonstrate that the region’s valuable linguistic finds are not limited to the precious collection compiled by the “Belgian Mouthpiece”*. The vocabulary of the Detroit region, enriched by three centuries of exchanges and encounters in the very heart of North America, constitutes one of the most important assets of the intangible heritage of French speakers from the region nicknamed the “Cradle of Ontario’s French Language Culture.”

Explore the world at the Royal Ontario Museum, in the heart of Toronto. Canada’s largest museum of world cultures and natural history, the ROM showcases a variety of family favourites such as Ancient Egypt, Arms and Armour and the Bat Cave. Not to be missed are the ten new galleries of China, Japan, Korea and Canada’s First Peoples, along with internationally-renowned changing special exhibitions.