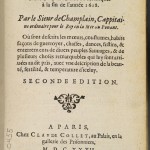 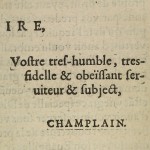 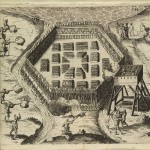 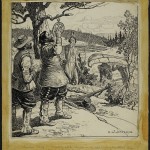 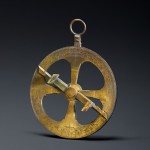 During the many years he spent exploring North America, Samuel de Champlain painstakingly recorded his observations of the landscapes he discovered and the people he met. These observations were dictated by what he saw first-hand, but were also shaped by his worldview and by his experiences in France and the West Indies. His published works are an invaluable account of the impact early 17th-century North America had on Europeans.

The following passages relating to Huronia are taken from documents published by The Champlain Society: The Works of Samuel de Champlain, Vol. I to III, 1922-1936.

Huron deer hunt
“I assure you that there is a singular pleasure in this chase, which took place every two days, and was so successful that, in the thirty-eight days during which we were there, they captured one hundred and twenty deer” (Vol. III, p. 85)

Huron dances
“They have only two kinds of dances with some sort of measure, one of four steps and the other of twelve, like the trioly of Brittany. They dance very gracefully” (Vol. III, p. 150)

Huron burial ceremony
“As regards the burial of the dead, they take the body of the deceased, wrap it in furs, cover it very neatly with tree-bark, then lift it up on four posts on which they build a cabin covered with tree-bark, as long as the body” (Vol. III, p. 160)

The Royal Ontario Museum (ROM) is the only multidisciplinary museum in Canada that includes natural history, art, and archaeology. The ROM is also one of the leading provincial institutions that is still active within scientific and archaeological research around the world. It is home to an internationally celebrated collection that explores a large variety of subjects through its diverse museum programs, galleries, and exhibitions. Visitors can participate in a variety of family and children’s programming, adult workshops, tours, conferences, and hands-on activities. The museum also offers an interactive web site, and public access to their research library.