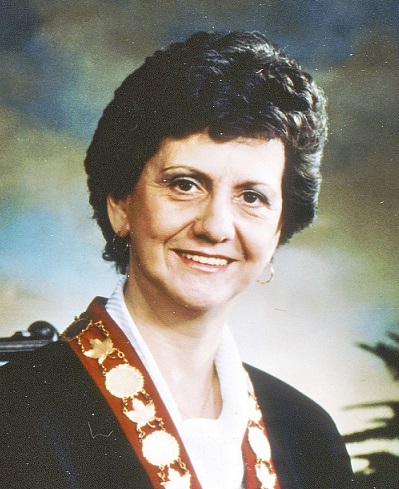 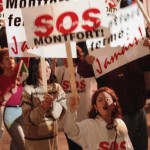 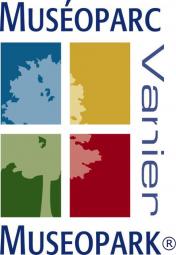 Gisèle Lalonde, née Deschamps, was born in Eastview (now Vanier) on June 28, 1933. She played a very important role in the development and preservation of Francophone institutions in Ontario, in addition to playing an undeniable part in the French fact in Canada. She attended École Montfort, the Pensionnat Notre-Dame-de-Lourdes boarding school and École secondaire d’Eastview. She became federal president of Jeunesse ouvrière catholique before she was 20. After graduating from the University of Ottawa Normal School in 1951, she pursued a career in teaching at the Montfort, Saint-Paul, Garneau and Saint-Gabriel schools from 1951 to 1973. In 1965, she became the first woman elected chair of the Eastview Separate School Board.

Lalonde was school commissioner of the Ottawa Catholic Separate School Board for 12 years, and sat as its vice-chair in 1972, 1973 and 1975, and chair in 1974 and 1976. The co-founder and then the first executive director of the Centre franco-ontarien de ressources pédagogiques (CFORP) from 1974 to 1984, she was also executive director of the Association française des conseils scolaires from 1980 to 1981. In addition, she was a member of the founding committee and board of governors of the Collège catholique Samuel-Genest (1978-1979).

Eager for further progress on the files and priorities of French Ontario during the 1977 provincial elections, Lalonde attempted to secure a seat in the Legislative Assembly as a candidate for Bill Davis’s Progressive Conservative Party, but was unsuccessful.

It was under Lalonde’s leadership as chair of the Council on Franco-Ontarian Affairs (1984-1985) that the first symposium for Francophone women was held in 1985. Lalonde then became the first woman elected mayor of Vanier, an office she held from 1985 to 1991. The Association française des municipalités de l’Ontario was established in 1989 at her initiative.

An appeal to Lalonde’s passion and drive resulted in her leading the S.O.S. Montfort movement from 1997 to 2002 in a battle to save Hôpital Montfort from the threat of closure by the provincial government.

From 1999 to 2013, Lalonde became co-chair and later chair of the Opération Constitution movement to enshrine the rights of Franco-Ontarians in the Canadian Constitution.

Not surprisingly, all of Lalonde’s efforts have been recognized by a number of organizations seeking to pay tribute to her. She received the Séraphin-Marion award of the Société St-Jean-Baptiste de Montréal and was made a Knight of the French National Order of the Legion of Honour in 2002, and was appointed to the Order of Canada in 2004 and the Order of Ontario in 2006. A public high school in Orléans has proudly borne her name since 2003.

The Muséoparc Vanier Museopark is a non-profit organization dedicated to the development, preservation and dissemination of both the tangible and intangible heritage of the Quartier Vanier, Richelieu Park and the French-speaking population of Ottawa, for the present as well as future generations. It is the only francophone museum in Ottawa and one of the rare Canadian museums outside of Quebec dedicated to the French-speaking community.