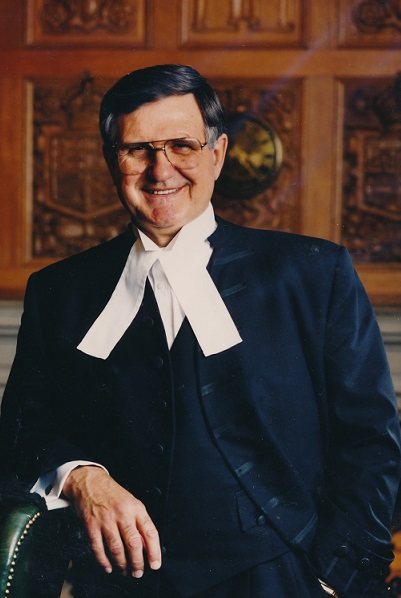 Born in Mattawa on July 25, 1935, Gilbert Parent was five years old when his family moved to Welland. The son of a janitor, he became a high school French and physical education teacher in Welland and then a vice-principal in Thorold, under the Niagara South Board of Education. He made his first foray into politics when he was elected trustee of the Welland County Roman Catholic Separate School Board. Parent then entered federal politics under the Liberal banner, becoming the MP for St. Catharines in 1974. He was re-elected in Welland County in 1979 and 1980, and then defeated in 1984. Parent was elected again in 1988 and 1993, this time in Welland-St. Catharines-Thorold, and then in Niagara Centre in 1997.

After serving as Parliamentary Secretary to the Minister of External Affairs (1977-1979) and then to the Minister of Labour and Minister of State (Sports) (1980-1981), Parent became Speaker of the House of Commons on January 17, 1994, remaining in that position until January 28, 2001. During his first term, he had to preside over an assembly made up not only of the three traditional political parties – the Liberals, Conservatives and New Democrats – but also the Bloc Québécois and the Reform Party. Gilbert Parent died in Toronto on March 3, 2009.

During the 1994 election for Speaker of the House of Commons, MPs had to choose between two bilingual colleagues from Ontario, Gilbert Parent and Jean-Robert Gauthier (Ottawa-Vanier). It was an extremely tight race, with Parent winning by a bare majority of one. Jean-Robert Gauthier resigned a few months later to become a Senator.

Located in a red pine log building in Explorers Point Park, this community museum focuses on Mattawa District and the Mattawa and Ottawa Rivers. Artifacts from the local logging, farming, trapping and transportation industries are on display.