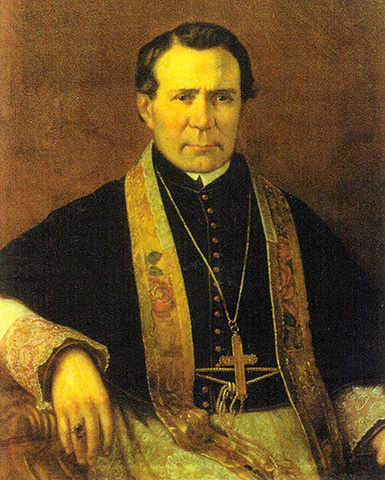 Courtesy of the Archives of the Roman Catholic Archdiocese of Toronto (ARCAT).

First and foremost a preacher, Armand de Charbonnel is recognized as “father and founder of the ecclesiastical province of Toronto”. During his episcopate, that lasted ten years, he had 23 churches built, organized the Society of St. Vincent de Paul, and founded important institutions such as hospitals, orphanages, retirement homes and youth hostels. He had several religious communities brought into the diocese to take care of education and social assistance, among others, the Christian Brothers, the Basilian Fathers and the Sisters of St. Joseph. He is credited with the creation of separate schools (he was a member of the Council of Public Instruction).

Ordained a priest in 1825, he then joined the Sulpician fathers in 1826 and, as a young priest, taught seminars in Lyon, Paris, Bordeaux and Versailles. In 1838 he declined the invitation of Cardinal Donnet, who offered him the post of vicar. A year later, he turned down the same offer from the Bishops d’Autun and du Puy. His escape to America did not help, as he was offered a bishopric in an English colony, and then a coadjutorship in New Orleans; de Charbonnel preferred to teach in Baltimore. In 1840 he arrived in Montréal and remained there for seven years. Ill with typhus, he returned to France for treatment.

Pope Pius XI called him to Rome in 1850, and ordained him the second bishop of Toronto and the service itself was held in the Sistine Chapel on May 26th, 1850. In 1856, he succeeded in dividing his territory for the erection of the London and the Hamilton dioceses. French by birth and by affection, Bishop de Charbonnel had never felt up to his task, due to the linguistic and cultural gap that existed between him and his flock.

Bishop de Charbonnel resigned on April 26th, 1860, returned to France and entered the Capuchin Order. He refused various honours, but he agreed to serve as an auxiliary to Cardinal de Bonald for twenty-two years. He was born on December 1st, 1802, at Castle Flachats, in Haute-Loire (France), son of Lord Jean-Baptiste de Charbonnel. He died in France on March 29th, 1891.

Archives of the Roman Catholic Archdiocese of Toronto (ARCAT)