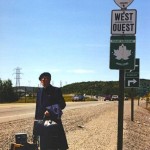 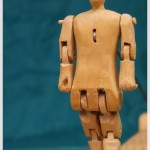 The Centre franco-ontarien de folklore, founded in 1972, celebrated its 40th anniversary in 2012. It houses the work of its creator, Germain Lemieux S.J., which constitutes an incomparable founding work in Franco-Ontarian heritage. Recognized in 1991 as a provincial organization, the CFOF is also for the province’s Francophone communities an important cultural space where the heritage of French Ontario, and in particular the repertoire of oral tradition, is gathered, preserved, disseminated, developed and enhanced. […]

The young priest from Quebec arrived at Collège Sacré-Coeur in 1941. Father Germain Lemieux, a member of the Society of Jesus since 1935, was assigned a course on Latin and Greek institutions, which included various passages of the Iliad and the Odyssey. This instruction introduced students to legendary heroes and to Greek gods and goddesses. The exploits of Hercules and the legends of mysterious creatures of fantasy were a subject of study.

Father Lemieux was determined to make the course interesting. He noted many similarities between Greek mythology and the stories and legends of his childhood which were widely known in French Canada, and he started using his memories in preparing his lectures. In this way he gave new life to the rhetoric courses, which attracted more and more interest from Franco-Ontarian students at Collège Sacré-Coeur.

In his second teaching assignment in 1948, Father Lemieux applied to the Société historique du Nouvel-Ontario (SHNO) to undertake research into regional folklore. By meeting people from the region, he gathered stories and songs. Then, with his students, he analyzed them, finding invaluable information which he traced back to sources from the Middle Ages. He had read in a European journal that young people criticized their elders for not gathering their ancestors’ oral heritage, and he proposed a more ambitious project to his superiors, declaring that the Jesuits had a duty to protect oral heritage. Thus was born a project of great scope, the project of a lifetime!

Father Lemieux had big plans. Among other things, he wanted to investigate to what extent Franco-Ontarians had “preserved the French spirit” *. He was told that his superiors would not oppose his plans if he was prepared to “devancer le rhythme du violon” *. The SHNO supported his request and sponsored it. Between 1948 and 1972, the music became more and more lively, with the result that the Jesuit priest’s research among Francophone communities of Northern Ontario provided him with extensive corpus of oral traditions: songs, stories and legends. After more than a quarter century of research, the Germain Lemieux collection included 3118 folk songs and 680 stories and legends *.

The Centre de recherche folklorique was founded in 1948, and in 1961 became the Institut franco-ontarien. In 1972, the Institut de folklore received a charter and took the name Centre franco-ontarien de folklore. First located at the University of Sudbury (1972-1981), it moved to the youth centre (Carrefour francophone, 1981-1985), then to the Maison d’Youville (a separate school and later an orphanage; 1985-2002), and then bought a former school on Dollard Street (2002-2011) and finally returned to the University of Sudbury in 2011. It should be mentioned that in 1981 the Department of Folklore was created at the University of Sudbury, providing university ties for the CFOF. Through this organization Father Lemieux contributed further to “disseminating the oral heritage of French Canadians of Ontario” *. […]