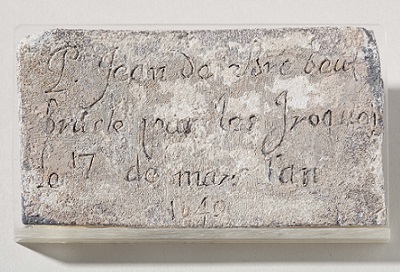 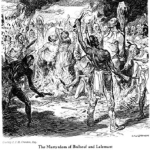 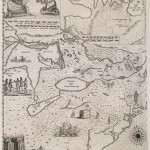 Jesuit missionaries created the Mission of Sainte-Marie Among the Hurons, near the present city of Midland, in 1639. For ten years, this served as the first home of French culture in what would become Ontario. Huronia was a strategic point in the fur trade and a place of conflict between the Hurons and the Iroquois. The tension reached its peak between 1648-1649. Jesuit missionaries were captured, tortured and killed. In 1930, Pope Pius XI canonized the eight Canadian martyrs.

Jean de Brébeuf was born in Condé-sur-Vire (France) on March 25, 1593. He was ordained as a priest in 1622, arrived in Québec in 1625 and crossed the 1,300 km separating Québec from Lake Huron in July, 1626. He spent three years in Huronia, and then returned to France because of obligations. Brébeuf and his companions returned and founded missions to evangelize the natives despite increasing resistance due to the plagues that were hitting the Hurons (epidemic, famine, etc.).

The historical site of Sainte-Marie Among the Hurons and the National Shrine to the Canadian Martyrs in Midland are places that attract thousands of tourists and pilgrims every year. Also, many elementary and secondary schools in Ontario have the appellation “Canadian Martyrs” or bear the name of one of them: schools such as Saint-Jean-de-Brébeuf, Saint-Jean-de Lalande Saint-Noël-Chabanel, Saint-Charles-Garnier, Saint-René-Goupil.

The ministry operates and maintains two historic attractions. Sainte-Marie among the Hurons in Midland (1639-1649) is a reconstruction of the 17th century headquarters of the French Jesuit mission to the Huron people. It was the first European community in Ontario and home to six of the eight North American Jesuit martyrs. Discovery Harbour in Penetanguishene represents the period from 1817 to 1856 when the Royal Navy and the British Army maintained a naval dockyard and military garrison at this strategic defence station on Georgian Bay. Discovery Harbour is the home of replica vessels and the King’s Wharf Theatre offers professional summer theatre.