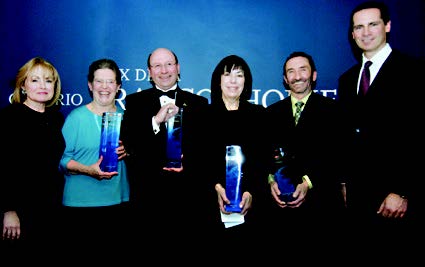 The winners of Ontario Francophonie Awards in 2006. 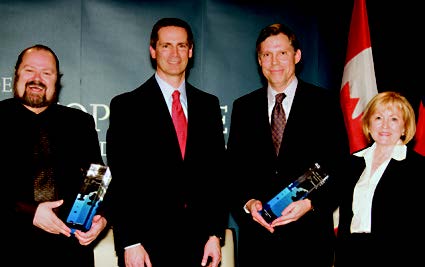 The winners of Ontario Francophonie Awards in 2008.

The visual platform for the Accent on Youth Strategy.

The year 2006 marked the 20th anniversary of the French Language Services Act. To celebrate this milestone in the history of French Ontario, the Government of Ontario created the Ontario Francophonie Awards as a way to honour Francophones and Francophiles who have made a valuable contribution to the vitality and well-being of Ontario’s Francophone community. The ofa also created a travelling exhibition on the history of French Ontario, entitled La francophonie ontarienne : d’hier à aujourd’hui.

2006: A monumental franco-ontarian flag is erected in Ottawa

2006: Creation of the Ontario Francophonie Awards

2007: Creation of the Office of the French Language Services Commissioner

French Ontario consolidated its institutional base with the self-governance granted to TFO in 2006 and the creation of the Office of the French Language Services Commissioner in 2007. With full independence in June 2006, TFO strengthened its ability to play an active role in the Franco-Ontarian economy and to support the French-language education system. For its part, the Office of the French Language Services Commissioner conducts independent investigations, either in response to complaints or on its own initiative, to ensure that members of the public receive high-quality services in French from the Government of Ontario.

Another milestone in the recognition of the French presence in Ontario was reached in 2007, with the introduction of French licence plates for personal vehicles.

Investments in the education sector are now making it possible to expand York University, Université de Hearst, and La Cité collégiale, and to enhance French-language postsecondary program offerings in Ontario.

The first États généraux de la francophonie de Sudbury were held in November 2008. Bringing all sectors of the Sudbury community together in a planning exercise, this event made it possible to lay a foundation for setting priorities for the region’s economic, cultural, community, social, and artistic development.

Each of these milestones has enabled Francophones to face the future with optimism and to focus their efforts on training the next generation of Francophone leaders. With its community partners and with private companies that have roots in the community, OFA launched its Accent on Youth Strategy in 2008 to encourage young Francophones to socialize, work, and live in French.